Conference attendees:
To see the keynote addresses click on the title. For concurrent session presentations please contact the presenter whose name and email address is in the back of the conference handbook.

‘Super-Ageing – a whole new way of looking at older people’

Super-ageing, the topic of the keynote address, has been developed in the Auckland Supercity context. Its vision is to harness the skills, life experience and motivation of active older people in each of Auckland’s 21 local board areas, to be the drivers of local wellbeing projects based in community hubs. This involves ascertaining the needs and wishes of local people of all ages, cultures and backgrounds, which then forms as the basis of initiating action based on a well tested organizational model, to benefit all participants and their community. The overall philosophy here is one of empowerment and self-determination, and of providing a key role for older people to contribute to our communities.

After a long career as a university academic, John is now a full time author and consultant.  He is passionate about health promotion, wellbeing and community issues, especially from an empowerment perspective, and about innovation in these and other sectors, now turning his attention to the wellbeing of older people, in particular with projects called Super-ageing and Life is Do-able, and also aspects of Auckland as an Age-Friendly City.

Kathleen is a researcher and social innovator who works to inspire a new vision of later life. She is a foundation member of the Strategic Advisory Group for the WHO Global Age Friendly Cities and Communities Network. As a researcher at the University of Melbourne, Kathleen undertook the original research contributing to the development of the WHO Global Age-friendly Cities Guide, later working with older people leading the development and implementation of COTA Victoria’s Age Friendly Victoria initiative.

Kathleen provides advice to state and local governments, businesses and other organisations across Australia and internationally on the creation of age-friendly environments.  With a long involvement in the health and community sectors as clinician, academic and in policy-making Kathleen brings to her work a deep understanding of the multiple strategies possible to bring about active ageing.

Kathleen is Chair and Director of Carrington Health, a community health service, and Director of Life Experience, a social enterprise with a mission to transform the face of ageing in Australia for the better.

Martijn Huisman is scientific director of the Longitudinal Ageing Study Amsterdam (LASA). His main focus is the role of socioeconomic adversity on health in old age. Besides this, he is research coordinator of the Amsterdam Center on Aging (ACA).

Martijn obtained an MSc in Clinical and Health Psychology (1999) and an MSc in Epidemiology (2003). He received his PhD in 2004 from Erasmus MC for his thesis entitled “Socioeconomic inequalities in health in Europe; studies of middle-aged and older populations with a special focus on the role of smoking”. He has worked at EMGO+ since 2009; specifically, at the department of Epidemiology & Biostatistics. He currently leads several projects that use a combination of qualitative and quantitative research. Examples of specific topics in his research are: perceived control in relation to health care use in older adults (National Program of Care for the Elderly) and resilience in older adults who have been exposed to socioeconomic adversity (NWO, VIDI).

Originally from Himatangi, Rangimahora considers it a privilege to have worked for the Rauawaawa Kaumātua Charitable Trust since 2010. The Rauawaawa was established in 1997 by a group of Kaumātua that identified a need for Kaumātua culturally focussed and accessible health, social and community based activities and services. The overarching aim being “Hei Manaaki nga Kaumātua”, to enhance the quality of life and well-being of kaumātua. Since 1997, Rauawaawa has been based at a facility that was opened in 1941 called Te Puna o Te Ora. The history of the facility and its long service to Maori in the Waikato as well as the opportunity to work alongside those she describes as “nga matauranga taonga” makes Rauawaawa a very special place to be.

Rangimahora has been educated at Massey University and has spent the last three decades working in both the health and education sectors in addition she has been a member of NZICA since 1993.

Panel Members for “Making Active Ageing a Reality – What does it mean for different cultural groups?“

John had a business and management background when he migrated to New Zealand in 1992.  In the nineties he was awarded Master of Education in Counselling (Honours) degree by The University of Auckland. He has over twenty years in training and counselling experience in New Zealand. John is the Director of Asian Family Services and is the chair of the Chinese Positive Ageing Charitable Trust with over 300 members. He has established a good relationship with stakeholders and the wider community. John has been invited by different universities in New Zealand as guest lecturer. In 2010 he was awarded The Queen’s Service Medal for his contribution to the ethnic community.

Lalita is the Chairperson for the Wellington Indian Association’s (WIA) Health & Wellbeing Committee and has been involved with the Committee for the last 5 years.  She was part of a group that looked at rest homes for members of the Indian community. She has also participated in the Ministry of Health’s Health of Older People (HOP) strategy workshops for Phase I & II.

Lalita studied at Victoria University of Wellington and completed a Masters in Sociology in 1982 which examined the Gujarati settlement in Wellington.  With a market and horticultural market research background, in 1992 she was the first person employed by Department of Internal Affair’s Ethnic Affairs Service which is now call Office of Ethnic Communities.  Currently Lalita is a joint director of the Miramar Natural Health Centre, Wellington. 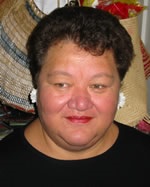 Taimalie Kiwi Tamasese is Coordinator of the Pacific Island Section of the Family Centre.  She specialises in Pacific focussed research as it applies to the Pacific Island people – for example in relation to mental health, poverty, housing, unemployment, cultural and gender deprivation.

In relation to social policy analysis, Kiwi is engaged in the development of new social policy perspectives emanating from various Pacific cultural rationalities. She is also concerned with the impact of government policy decisions on the Pacific Island Sector of New Zealand society.

Further areas of her work include: documenting and analysing the effects of cultural dislocation upon the Pacific Island community in New Zealand; a focus upon Pacific Island youth; and patterns of migration to New Zealand from the Pacific.  Kiwi is regularly contracted to speak and advise in areas of applied social policy at national and international levels.

Panel Members for “It Makes Sense”

Moira is a Research Fellow in the Health Promotion and Policy Research Unit, Department of Public Health, University of Otago, Wellington.  Moira’s areas of research include public health nutrition, particularly for children, oral health, child rights and aged care.  Moira was a named investigator in the Ministry of Health-commissioned Study of Older People’s Oral Health Issues in 2012, which included a national oral health survey of dependent older adults.  She has also published research in the area of oral health care provision for older adults and was a member of the workshops informing the review of the Health of Older People Strategy.  Moira has a background in clinical dentistry.

Catherine Hall is Alzheimers New Zealand’s Chief Executive. Catherine has extensive experience in the health and justice sectors. Her career began as a registered nurse before taking on management positions with services for older people including at Wellington Hospital, Methodist Social Services and with the Central Regional Health Authority. After 20 years, Catherine moved to the Justice sector, where she held various senior management roles, before coming back to health and joining Alzheimers NZ in 2012. Under her leadership as Chief Executive, Catherine has directed her energy to collaborating with the health sector, raising awareness and understanding of dementia, and delivering high quality resources for people affected by dementia.

It is almost 40 years since Kathy qualified as a podiatrist from the now disestablished Central Institute of Technology and immediately set herself up in private practice in central Wellington. Kathy has a wealth of knowledge of podiatric medicine as well as having a post graduate diploma in Podiatric Surgery. Despite the years she has never lost her interest and passion to enable, encourage and support her clients through the foot and mobility problems they may present her with.

Kathy has a past history of association with podiatric education as a clinical tutor at the NZ School of Podiatry and for many years served as a Member and Chairperson of the Podiatrists Board of New Zealand. Currently she is a Member of the Health Practitioners Disciplinary Tribunal and she continues to happily practice podiatric medicine in Wellington city.

st by training and a writer by occupation. In 2009 she developed a rare visual disorder that stops her driving and impairs her ability to read. She is a founding trustee of VICTA (Visual Impairment Charitable Trust Aotearoa NZ), an energetic new charity established in 2013 to address the unmet needs of the 100,000+, mainly elderly, New Zealanders with incurable vision loss who are not blind enough to qualify for help from the Blind Foundation. As a regular bus user, Lynley walks more, and has more interesting conversations with total strangers, than she ever had when she drove a car. 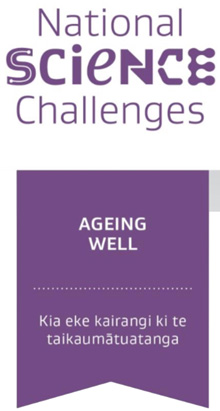